×
Delfina.
meet.
"Jewellery Designer"
“Ialways keep my rings on when I cook,” says Italian jewellery designer Delfina Delettrez, diving into a messy mound of flour and eggs. “I think it adds a preciousness that you can taste.” A fourth-generation member of the Fendi dynasty, Delettrez is best known for her eponymous brand which she launched to instant acclaim in 2007, but it’s in her Roman kitchen where you’ll most often find her blowing off steam. Her culinary style, like her jewelry, is playful. Today, for example, she’s baking a sweet pastry case filled with custard called Torta Della Nonna, or Grandma’s Cake. At its center lies one of her pearl rings, a lucky treat—or potential dental hazard—for unsuspecting guests. “Whoever gets the right slice, gets the prize,” teases Delettrez with a smile.
And therein lies her greatest quality: Delettrez makes the ordinary feel extraordinary with the simplest of (decadent) tweaks. It’s this exact mentality and an ethos of whimsy, fun, and attention-to-detail that’s garnered her brand legions of fans over the years, too. A love letter to surrealism in metal and gems, her designs draw from a library of Dali-esque iconography and her family’s extensive expertise in the creative and luxury fields. There’s also been a slew of singularly unique collaborations: She’s designed jewellery for Kenzo, Fendi, and New York’s Gagosian Gallery, in addition to pairing up with Luca Guadagnino to make the jewels for his movie “I am Love,” with Tilda Swinton in 2009. In more recent news, she’s been expanding into retail. This past September, Delettrez opened a sparkly new flagship on Via di Monserrato near her home in Rome, which she shares with her husband, Nico Vascellari, and their three children.
You’ll have to watch this week’s video to learn how Delettrez’s semi-precious kitchen drama unfolds in real-time, but before you do read on and discover her very special edition of Semaine. You’ll even find her cake recipe, if you want to join along at home. If you have an original piece of her jewelry to hide within it, so much the better.
Images by Billal Taright

Semaine: What role does food play in your life?

Delfina: Food is a fun way of experimenting with different materials. Even if every time I cook it ends in laughter and calling in a delivery pizza for everyone, I still enjoy it. But I am a slow, messy cook, and I care more aesthetics than taste. So things can look incredible…and taste not so great.

Semaine: What is your first food memory?

Delfina: My mom giving me milk while wearing a spectacular ruby and diamond ring. I always thought that the stone infused the milk with a precious serum that influenced my future as a jeweler.

Semaine: What is your family’s signature dish?

Delfina: My mom’s signature dish when we were children was lamb chops cooked in Coca Cola—a delicious invention that makes every child happy!

Semaine: In this week’s film you share your recipe for Torta della Nonna. What is your real-life Nonna like?

Delfina: My grandmother didn’t teach me to cook—she isn’t that kind of grandmother. But she taught me the art of hospitality, how to set up a great table, and how to put creative and personal touches in everything that I do.

Semaine: What piece of jewelry would you love to find inside a cake?

Delfina: A diamond ring. I’ve always wanted to crack diamonds with my teeth.

Semaine: What’s your definition of a perfect day?

Delfina: Any day spent with family on our farm in Italy. We walk in the forest, collect honey from the beehives, and pick vegetables from our garden before all cooking together in our marble kitchen. This is happiness!

Semaine: Your career as a jeweler has spanned over a decade. What have been some of the highs? And some of the lows?

Delfina: Only highs! One of the greatest moments was when the Louvre’s Musée des Arts Décoratifs acquired two of my pieces for their permanent jewelry collection in 2012, making me the youngest designer to be showcased at the venerated museum.

Delfina: It means being part of an incredible compilation of unique women who have helped define the woman that I am today—personally and professionally. Being in my family was like going to school from day one, but without fear and without performance anxiety. In front of me I had these great teachers who immediately taught me everything I needed. I remember having animated conversations since I was a child. No matter what age I was, I knew it was important to have a point of view. It’s an attitude that has pushed the accelerator of creativity in all of us.

Semaine: It’s your last meal. What’s on the table?

Delfina: A huge plate of spaghetti pomodoro e basilico—my favorite. I’ll be sharing it with my three kids and listening to Notturni di Chopin, which was the music I made them listen to when they were born.

Semaine: What do you hope to cook in the studio—and in the kitchen—in 2020?

Delfina: Lab grown meat. I hope this technology soon becomes more accessible and easy to find for everyone.
Now there’s nothing left to do but cook. Gather your ingredients, set your timers, and—Buon Appetito!

stream.
"Delfina at the Movies"
Reel in the mind with Delfina’s must-watch movie list. You’ll find plenty of Italian classics, plus a few wild cards to keep you on the edge of your seat.
1:
The Anniversary
ROY WARD BAKER, 1968

“A film which shows the obsession of Japanese over beetles.”
3:
Rosemary’s Baby
ROMAN POLANSKI, 1968

“I wouldn’t watch this movie while pregnant!!”
4:
The Conformist
BERNARDO BERTOLUCCI, 1970

“Just an elegant masterpiece – I love the scene of the two women dancing together.”
5:
Salo, Or The 120 Days of Sodom
PIER PAOLO PASOLINI, 1975

“The film that caused the most scandal in society.”
shop.
"Delfina's Essentials"

Essentials. Everybody needs them. Plus points if you can fit all of the following in a Fendi 'Baguette' or 'Peekaboo.' 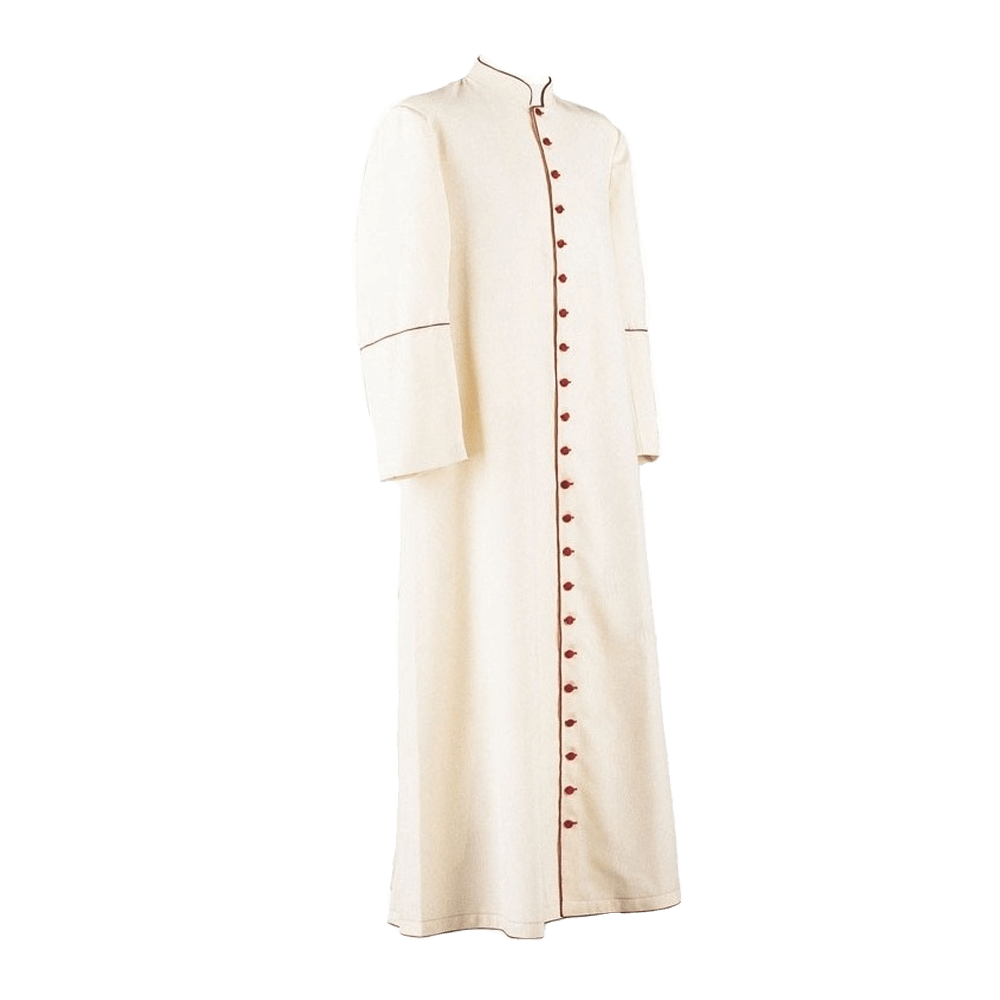 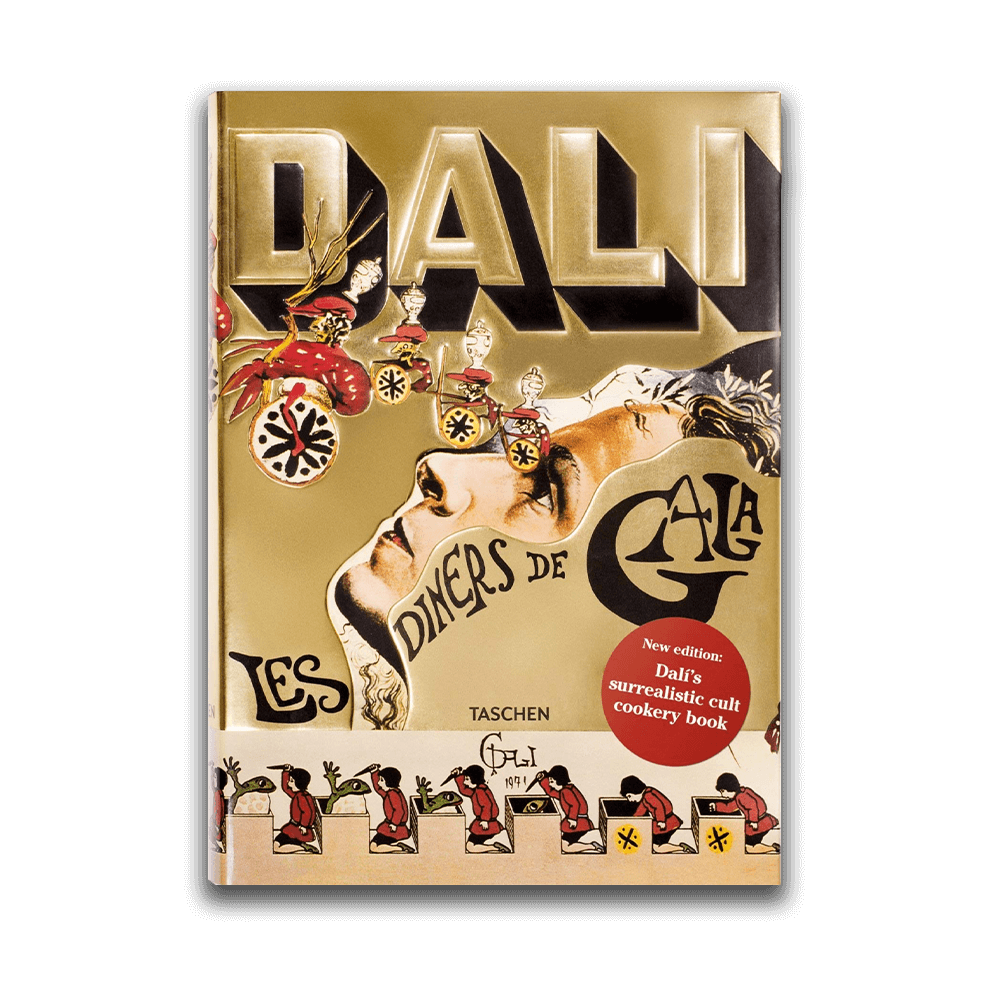 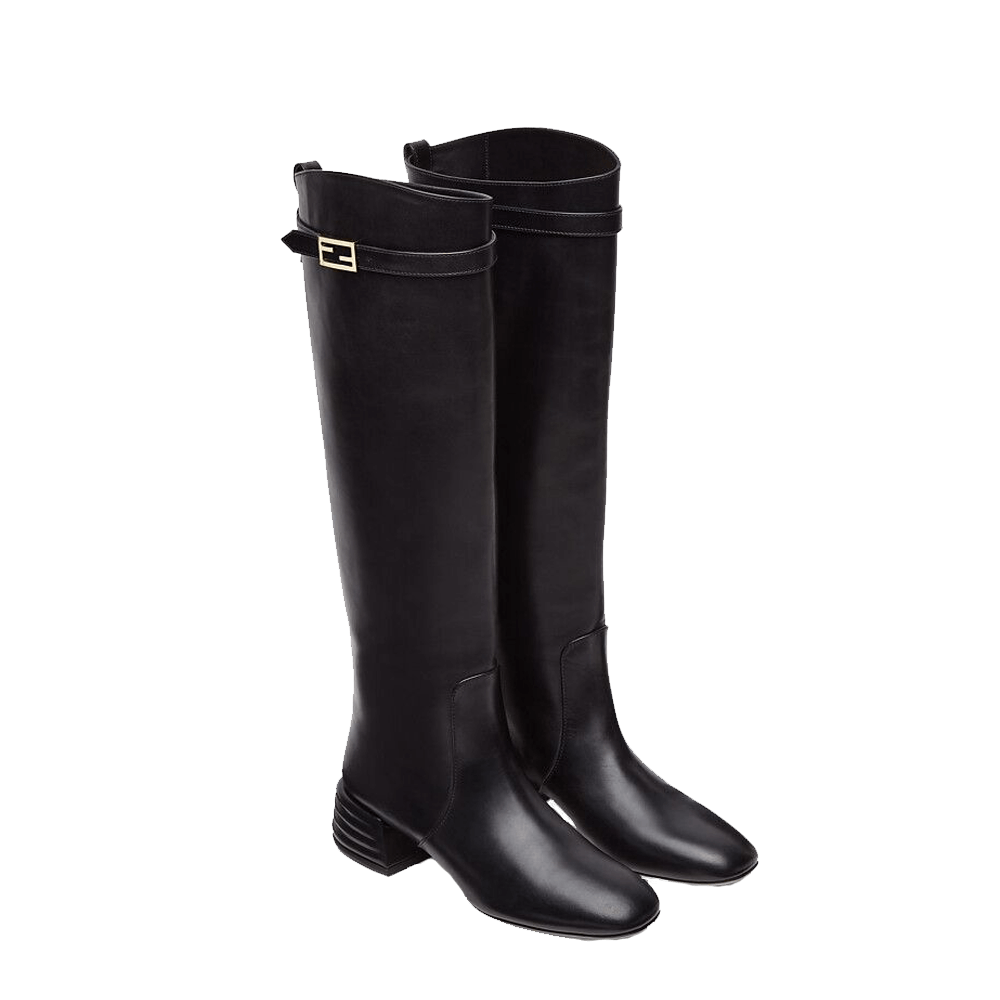 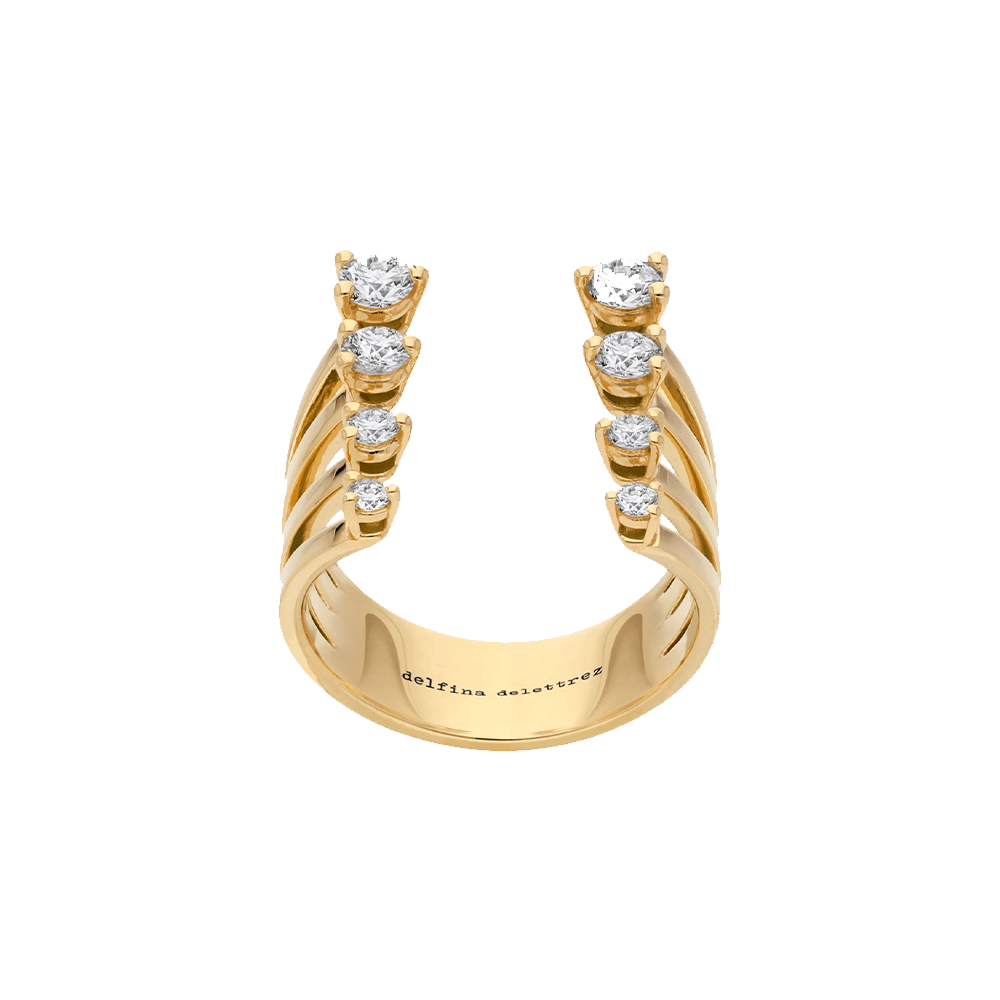 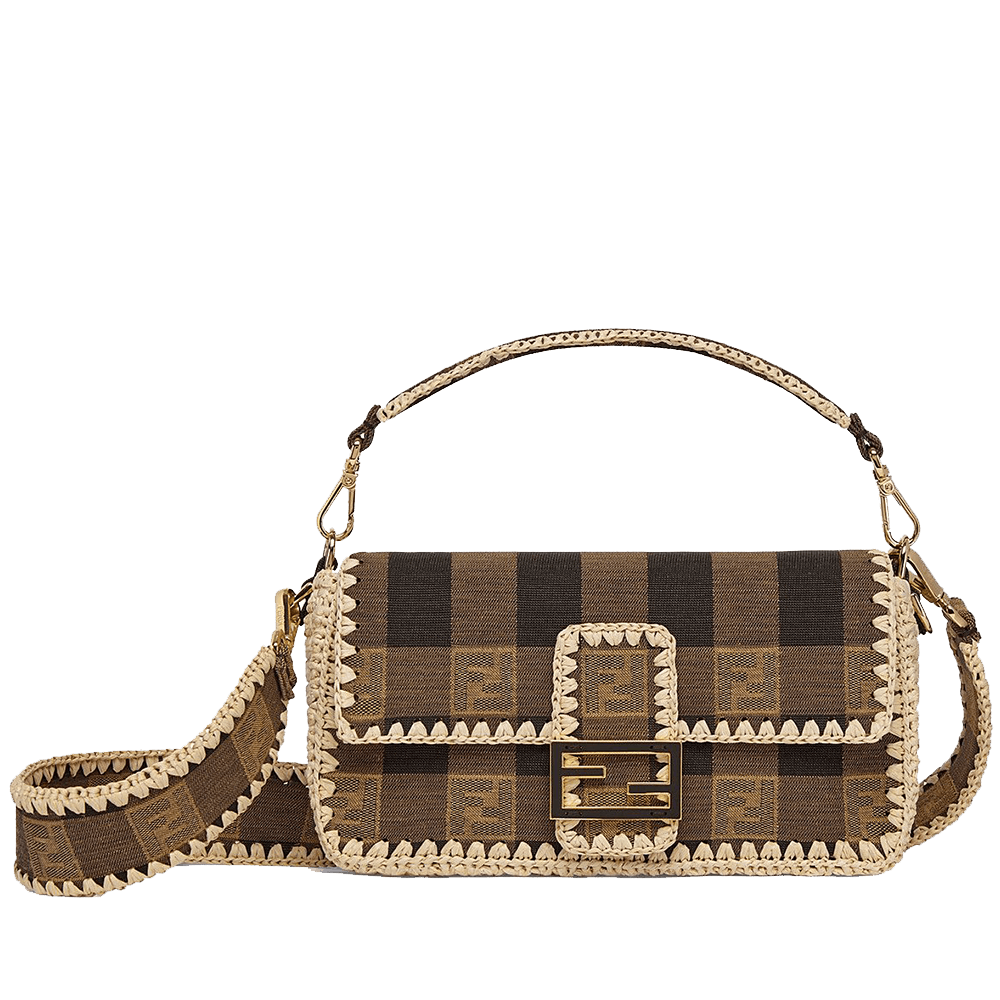 “Our family hotel, feels like staying in our family house.”
Salumeria Volpetti
47 Via Marmorata
00153 Roma
Italy

“Heaven for the eyes and mouth!”
Centrale Montemartini
106 Via Ostiense
00154 Roma
Italy

“It’s a nuns shop where I buy nuns guns- the first time I went there I had to pretend I was a nun going on a religious mission in order to convince them to sell me clothes.”
Chiesetta di Santa Maria in Cappella
6 Via Pietro Peretti
00153 Roma
Italy

“An Italian must, I have the ‘acqua isterica’ just for its name.”
Hollywood Tutto Sul Cinema
107 Via di Monserrato
00186 Roma
Italy

“You can spend hours talking to the owner on Italian cinema.”
read.
"Delfina's Bookshelf"
1.

Les Diners De Gala
by Salvador Dalií
“A lesson of how surreal can be applied to different universes.”
BUY
2.

Koh-i-Noor
by William Dalrymple
“The story of the most infamous diamond of the world.”
BUY
3.

The 12th Planet (Il pianeta degli dei)
by Zaccaria Sitchin
“A book based on alternative archeology, that gives a new interpretation of the history of the universe.”
BUY
4.

Story of the Eye: By Lord Auch
by Georges Bataille
“A small masterpiece of avant-garde literature.”
BUY
5.

“Love letters between two great writers. Thanks to their ability to write, it reaches very high peaks of expression.”

BUY
ask.
"I would cancel the concept of money."
Get to know Delfina like you never have before.

What does the word “taste” mean to you?
Delfina:
Means that sometimes also bad taste can be tasteful!

Do you have a life motto that you live by?
Delfina:
Mistake in italian is “errore” which also means to “wonder” …

What was the last thing that made you laugh?
Delfina:
Me trying to do a dance tik tok with my 13 year old daughter.

What are your favourite qualities in a human being?
Delfina:
Sense of humour

Who is your hero?
Delfina:
Marie Curie

What is your biggest flaw?
Delfina:
My shyness which can be mistaken for arrogance.

What is your best quality?
Delfina:
Adaptability

What would your last meal on earth be?
Delfina:
Milk, as my first one.

What does success mean to you?
Delfina:
The word success and its concept frightens me. Especially for a creative mind, the moment you think you have achieved success you risk losing it.

If you had the power to change anything you wanted in the world, what would you change?
Delfina:
I would cancel the concept of money.